Princess Nourah Al-Faisal is an entrepreneur and designer with more than two decades’ experience working in the design sector. Born in Saudi Arabia, Al-Faisal has always had a passion for fine jewelry and design.

She is the founder of Nuun Jewels, a luxury jewelry brand based in Paris. She also founded Adhlal, a research-based consultancy in Riyadh.

Al-Faisal’s interest in learning and creative thinking led her to study at King Saud University in Riyadh, where she received her bachelor’s degree in English literature.

She studied interior design at Richmond, the American International University in London, and then completed an apprenticeship in one of the most exclusive workshops in Paris, Place Vendome.

She developed her craft making privately commissioned pieces and continued to build upon her experiences and academic work in Paris and London.

She founded her first design venture, Nuun Jewels, a high-end jewelry house in Paris in 2014. Nuun was heavily inspired by Saudi culture, sparking a dialogue between both the Arab world and Europe.

Al-Faisal has been mentioned in magazines such as Forbes, Vogue Paris, and Emirates Women for her work at Nuun.

In 2018 she founded Adhlal in the hope of equipping future generations of Saudi designers with the tools they need to succeed and to build on the aims of the Kingdom’s Vision 2030 national development plan. The aim was to bring local designers together to share knowledge and provide forward-thinking mentorship and consultation throughout the Kingdom.

In 2020 she was appointed as a consultant by the chairman of The Jockey Club Saudi Arabia, Prince Bandar Al-Faisal, to strategize on the Saudi Cup and curate events during the Riyadh and Taif seasons.

In 2022 Al-Faisal launched a rebrand of Adhlal during a special event at the Saudi Design Festival in Diriyah, seeking to encourage designers to express their creative ideas through her consultancy. 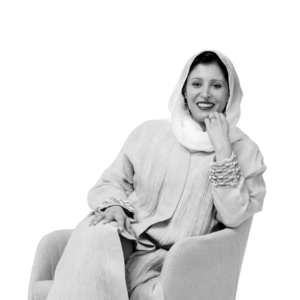