Mohammed Kazim has a healthcare background and a passion for culture, religion, history, and socioeconomic factors that go along with it.

He later worked as a clinical engineer project manager in Umass Memorial Hospital in Worcester, Massachusetts before joining Mubadala Healthcare in 2008. During his time at Mubadala, Mohammed worked on many projects and led the establishment of Wooridul Spine Centre where he later became the General Manager.

Mohammed co-founded Allinque Personal Assistance in 2010, and in 2012 whilst leaving Mubadala, co-founded Tamashee, a high-end Arabian Gulf footwear brand that is available across GCC cities and caters to a global clientele through its online platform. Mohammed had an essential role in driving Tamashee’s social causes which focus on preserving certain aspects of the Arabian Gulf Identity, representing the Arabian Gulf region’s culture, and spreading awareness about design-related elements as well as the social fabric of the Arabian Gulf. Mohammed led the diversification of Tamashee’s activities into 3 workstreams: Research Education & Consulting, Products, and Cultural Travel Experiences.

Mohammed also plays an important role in the management of Yokaz which focuses on distributing gourmet products. Mohammed is an Emirati citizen. 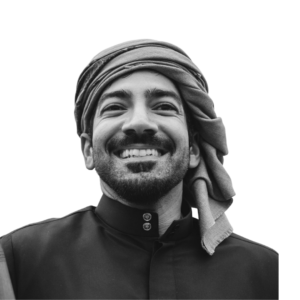